Dagmar received an associate business administration degree in Germany, and a B.A in Liberal Arts from the University of Houston. She started her career in the U.S. working for several international corporations involved in import and export, international trade, and banking. Following her true interest in the fields of teaching and education, she redirected her career after returning from a three-year stay in Singapore, first working for a private language school in Houston for five years, then transitioning to work for Rice University in 2002.


After successfully facilitating the growth of Rice’s science-related programs, she expanded her activities between 2012-16 to also manage the professional engineering master’s programs in the Brown School of Engineering. During that time she developed a marketing strategy, reshaped the curricula, increased enrollment, created a community for master’s students, and trained personnel at the engineering school.

After the hand-over, she turned her focus back to the science programs developing strategies to increase enrollment in the existing programs and build new ones. Presently, she oversees five programs in the Wiess School of Natural Sciences. In collaboration with faculty and board members, she continuously strives to improve courses and curricula, develop new programs, and work with industry leaders to ensure that graduates receive the enhanced skill-set demanded in industry.

Furthermore, she has been actively involved in the National Professional Science Master’s Association (NPSMA) since 2007, and has served as Vice-President of the association in 2010, as President in 2011, and Immediate Past President in 2012. She served as committee chair on several committees over the years and lead the 2nd National NPSMA Conference committee holding a highly successful conference in Atlanta in 2010. She was an officer on the conference committee for the 2012 conference and currently, leads several committees and serves as editor for the NSPMA Chronicle. In addition, she is a member of WEN, NAGAP and GACC.
Company
Rice University 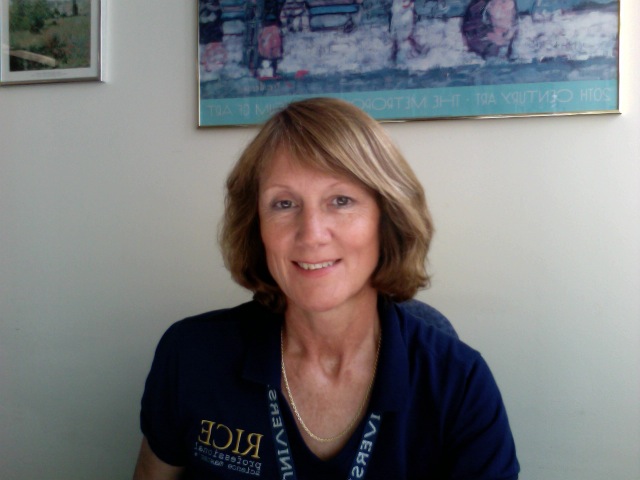